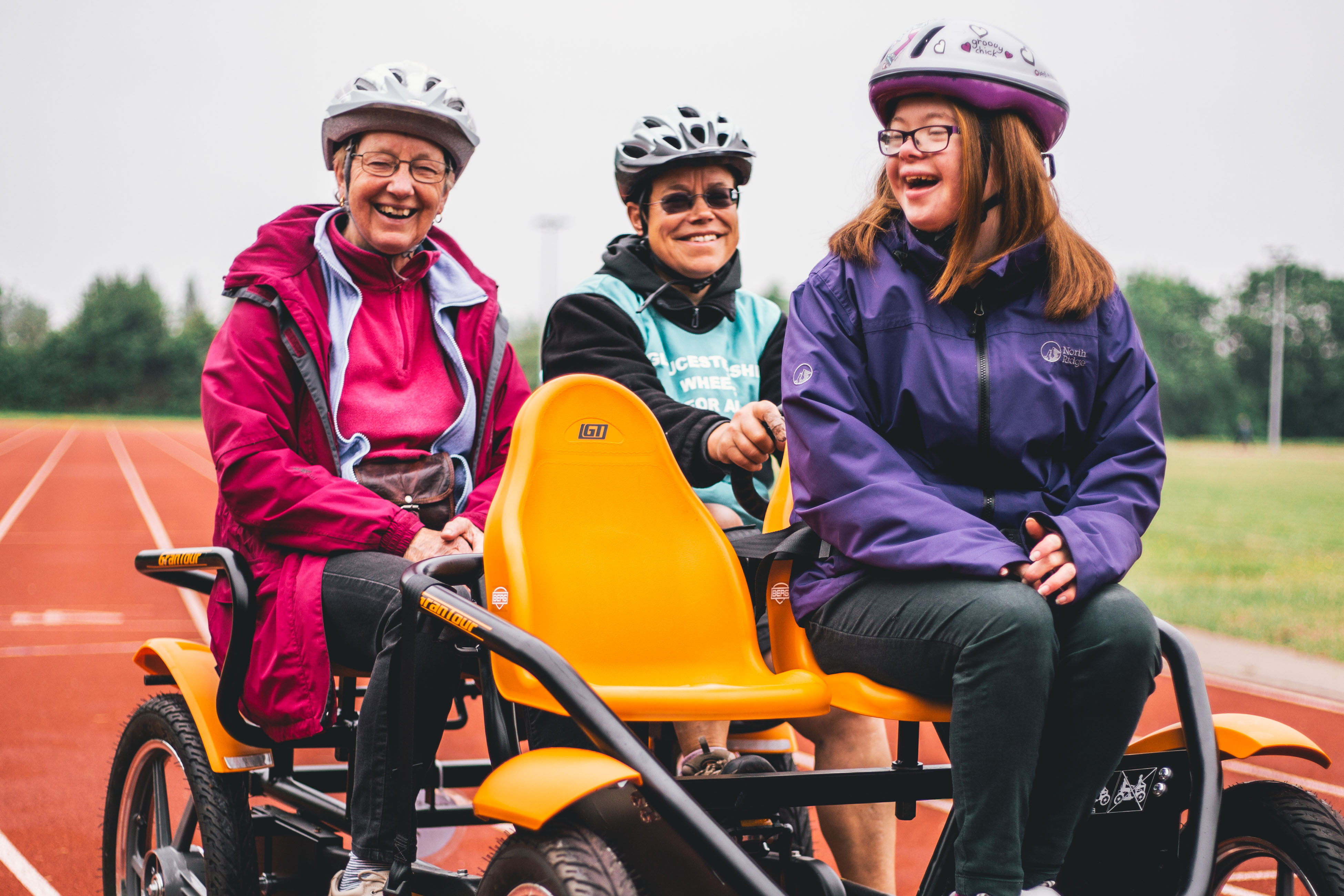 "Inclusive cycling is about making it possible for those who would otherwise be unable to take part."

Having worked as a physiotherapist, I want to enable people to enjoy cycling. Cycling is an activity that some are able to do without even thinking about it. We can do it as a sport, for leisure or use it for transport. Inclusive cycling makes that possible for those that can’t ride a two-wheeled bike and I have seen the sheer enjoyment and fun it brings. You’re getting fit, but in a fun way!

While working as a physiotherapist at Leonard Chesire home in Cheltenham – Gloucestershire House – I entered 3 of the residents into the Tri-Together Triathlon at Crystal Palace, and we needed to find an adapted trike for one of our residents. At the time, the closest place I could find that had an adapted trike was up in Manchester.

This was the first time I had come across inclusive cycling and I didn’t know anything about it before that! We entered the residents in the triathlon and two years later we entered again. By this time, a Wheels for All inclusive cycling centre had been set up in Swindon, so both my physiotherapy assistants and I started taking residents there every week to cycle using the adapted bikes. The residents absolutely loved it, so I started looking into what inclusive cycling was available in Gloucestershire, but there didn’t seem to be anything around.

I contacted Leonard Cheshire Head Office and Cycling Projects – the national inclusive cycling charity – who were keen for me to set up a Wheels for All centre in Gloucestershire, as they support people to set up centres across the country. With Active Gloucestershire's support we were able to hold lots of inclusive cycling taster sessions around the county. The Gloucester Athletics Track Management team at Blackbridge offered us the use of the track and of a large container to store the bikes, and the project grew from there.

In December 2016 I left my job as a physio after 16 years and have been delivering inclusive cycling for Leonard Chesire ever since. We started doing three sessions a week at Blackbridge and have now set up a centre at Pedal A Bike Away in the Forest of Dean. We’ve also have taken the bikes to local events in Gloucestershire, such as Big Health Check Day, Special Olympics taster days and Beat the Street Gloucester. It’s been amazing to see more people find out about us and watch the project grow.

We have also taken the bikes out to local care homes, especially more recently, as residents have been vulnerable and haven’t been able to go out due to Covid-19. Many say they haven’t been on a bike for 50 years, so being able to give them that memory is lovely. Most importantly they get to meet others, enjoy being out in the open air and come away feeling fit and healthier.

During lockdown there have been a lot of virtual activities online, so one of the residents actually came up with the idea to cycle the distance of Route 66. We linked up with three other Leonard Cheshire homes and residents have been using the static bikes to take part. Each week a resident helped to gather all the numbers which we added to a map of Route 66. It’s been a fantastic motivator and a huge boost for residents, as they’ve been able to feel part of something. We’re currently fundraising for some money to go to the homes to get new static exercise bikes or repair old bikes, so it’s been a really positive thing to be a part of.

Belmont School has also been really keen to provide more opportunities for people in the community, including neighbouring special schools. While we haven’t been able to get a base in Cheltenham yet, being able to use Belmont School's playgrounds and adapted bikes during the school holidays makes inclusive cycling accessible to more people.

During the summer I’m going to be at Belmont one day a week on the playground to get children or adults doing some cycling. We’re also working with Belmont and others in Gloucestershire to get an inclusive cycling trail and other facilities to create a more inclusive hub for the community, so it’s exciting to be part of that too.

Attending the Gloucestershire Active Inclusion Network meetings and Active Ageing Forum hosted by we can move and Active Gloucestershire has been invaluable. The project wouldn’t be where it is now without their help. Having the opportunity to attend those meetings to network, promote what we do and share ideas with other people is brilliant. I’ve told other Leonard Chesire homes across the country to get in touch with their County Sports Partnerships or CSP's to get the support they need to start their own centres.

My advice to those who are unsure about getting involved with inclusive cycling is to come along and watch. There’s no pressure to cycle straight away and you can have a go when you feel ready. It always helps to come along with someone you know to encourage you by cycling with you.

Inclusive cycling is a lovely social activity which helps people to exercise and build their confidence, including those who want to get back into cycling following an injury or illness, anyone with a physical and/or learning disability or autism, mental health problem or dementia. A lot of families and adults have gone on to buy their own adapted bike after coming along to the sessions and are now able to cycle as a family or independently.

For me, it’s about making it possible for those who would otherwise be unable, to take part in this activity. That’s why it’s so fulfilling. It’s about putting yourself in someone’s shoes and giving people that opportunity to be active.

Being nominated for the 100 Women in Cycling award was a huge surprise! It’s a real honour to be among women doing amazing things in their community. But more than that, it’s positive to know that inclusive cycling is growing, and more and more people are releasing how important it is. It’s not all about elite cycling – it should be accessible to everyone.