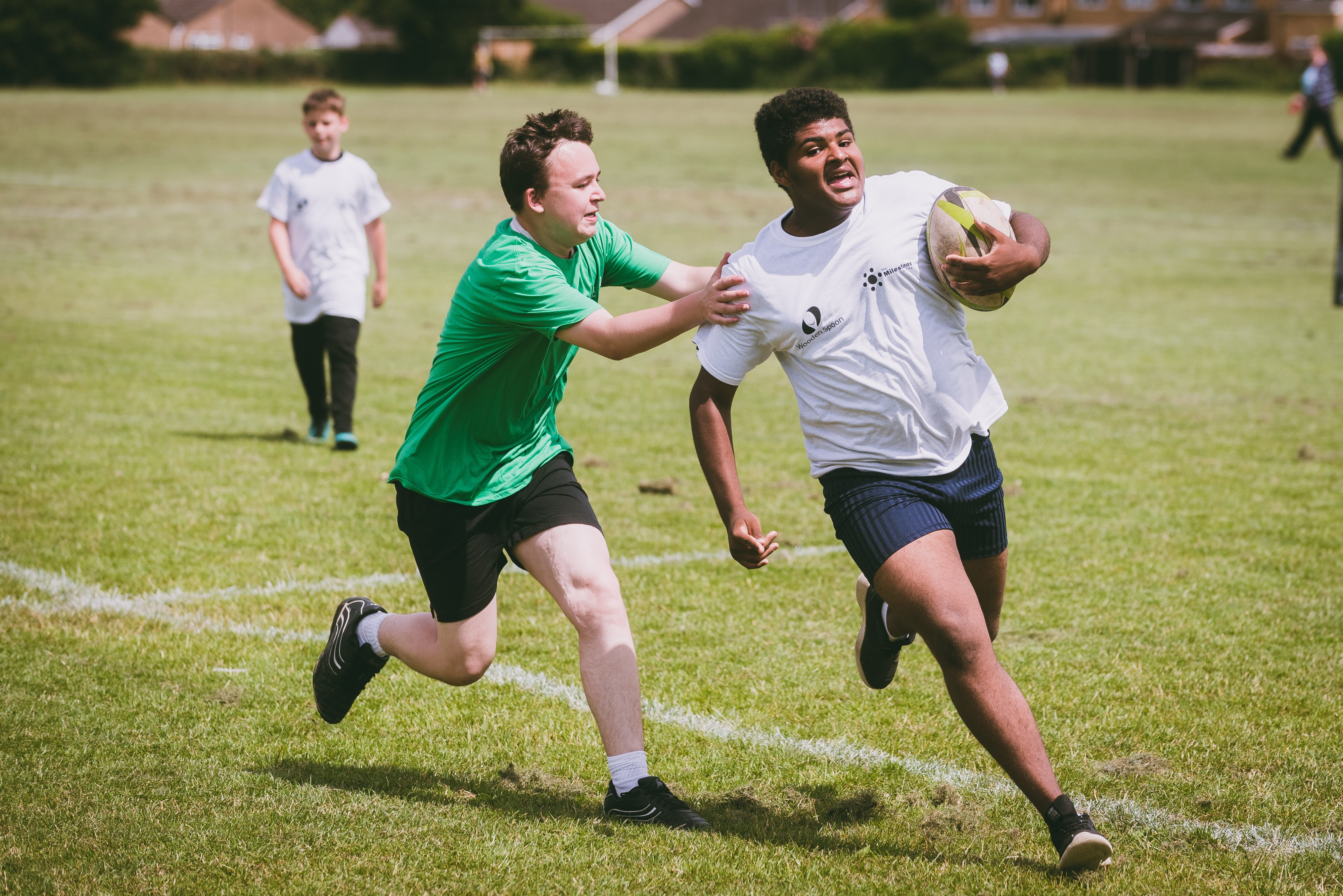 "Physically, he never took part in anything before, and now he’s constantly out there, taking part in other sports."

Mixed ability rugby gives young people the chance to do well on and off the pitch in Gloucestershire.

Background
Gloucestershire has a thriving rugby scene yet until 2016, people with special educational needs (SEN) could only enjoy the sport as spectators. Since then, a partnership between Longlevens Rugby Club and The Milestone School has been getting young people with special needs onto the rugby pitch, with other SEN schools now on board too. As a busy, community focused rugby club located on the outskirts of Gloucester, Longlevens Rugby Club always held a mission to get more young people enjoying rugby, and that is why they were natural hosts for the mixed ability rugby (MAR) squad, nicknamed the Gloucester Griffins.

Joe Page is the lead Physical Education (PE) teacher at The Milestone School, a school for children aged 3-16 who have special educational needs. “Our pupils have a wide variety of challenges, including autism, wheelchair users, ASD pupils, and some with behavioural and social issues. It’s always been clear that sport and PE is one of the few things that engages the children across the board. Many pupils struggle in the classroom but sport and PE gives them an even playing field.”

Getting young people engaged in rugby
The program started jointly with Gloucester Rugby, providing weekly coaching sessions for 15 children at The Milestone School. Now the squad engages 125 participants, including young people from three special educational needs schools and adults in the county. The mixed ability rugby is funded by Active Gloucestershire along with support from local firm Dee and Griffin Solicitors as part of their award-winning corporate social responsibility program. Before starting the program, head coach Rich Steward was aware there could be some obstacles to getting children involved. “There’s a perception that rugby is a rough contact sport, so that’s a challenge when it comes to attracting kids with additional needs. But what we do isn’t rough. We stay away from contact. The main focus is to get children active and teach them sportsmanship and life skills.”

The training sessions take place on Longlevens’ pitches, located next door to The Milestone School. Despite being nearby, Joe and the other staff had anticipated challenges around taking the children off-site, with all other extra-curricular clubs taking place within the school grounds.

“We always prepare the pupils for changes, so prior to the sessions, we showed them pictures of the coaches, did lots of preparation work around what would happen, and took them for a walk over to the field.”

Joe explains further, “We were also wary about the ratios – we have large class-based teams working with children, supporting them really closely with four adults for every 11 kids. At the rugby sessions, that drops to 18 pupils in a group with one or two coaches. We take a step back and the way it’s worked has been remarkable. There were occasional issues at the start, so we’re always on hand to deal with anything if needed. We attend as spectators and it’s amazing to see how the young people just haven’t looked back.”

Transforming the children’s self-esteem with teamwork
Joe soon realised he was projecting his own initial reservations onto the situation because he was concerned about taking pupils who struggle with life outside school to an off-site activity. Yet he soon saw the pupils respond positively to what rugby offers; there have been obvious benefits back in the classroom too.

Joe reflects, “The progression these young people can make in sports isn’t necessarily measurable, but we’ve seen huge differences in their confidence and self-esteem. A few kids really take off with the skills, but for many, it’s the social aspect that’s amazing.”

“One of the girls taking part had always shown talent in sports, but her confidence used to be so low that mainstream activities were just too intimidating. The mixed ability rugby program has given her the opportunity to take part in a supportive environment. Through meeting the coaches and learning from people who know what they’re doing and who also understand her challenges, she’s really flourished. She is very talented and this has given her the opportunity to show it and progress. Her teacher has said how much she enjoys it, and she’s happier in class as a result.”

Head coach Rich has seen dramatic changes too. “We wanted to get them playing and preserve the spirit of the game, even though it’s adapted. It’s competitive, fun, and they really learn about sportsmanship, to each other and towards the sports officials. There’s a huge amount of teamwork involved too. It teaches them so much.”

“One lad used to stand at the corner of the pitch to start with, hands in his pockets, very shy and absent from what we were doing. So, we took the ball to him and let him be the centre of the game. He hadn’t run before and was flat footed so we taught him how to make it easier to run and spent time with him, coaching him and guiding him how to play.”

“His mum wrote us a letter to tell us how as soon as he started rugby, his confidence started to grow and he became more approachable and vocal with his family. Physically, he never took part in anything before, and now he’s constantly out there, taking part in other sports.”

Gloucester Griffins has a senior team as well as working with juniors in schools. This provides a natural progression once pupils leave The Milestone School, something Joe sees as hugely important.

“One of the brilliant things about this program is that it provides them with an activity, a sport, they can continue into adulthood as part of the same club. Sadly, many activities stop once the children turn 16 and leave The Milestone School – there’s a lack of things they can go on to. This fills that gap.”

Joe has found the process of working with Active Gloucestershire remarkably easy. “Active Gloucestershire have supported the sessions with coaches and equipment, and it’s all been top- notch. They’ve been easy to work with and everything has run like clockwork, so we’ve just been able to get on with it. They came to the end of year celebration with the other schools that have been involved, which was a great success. I’d highly recommend other sporting organisations to approach them for funding.”

“From a special school point of view, they’re the organisation to go to for advice or funding if you’re thinking of developing a new or current sporting idea or system. They’re the first people I would go to, on the journey to setting something new up.”

And Joe’s plans for the future? “Having seen the impact of mixed ability rugby, we’re keen to keep it growing and get more pupils involved, and engage more schools.

Rich organised a brilliant summer tournament and will be involved in talking to other schools about the benefits of mixed ability rugby, so hopefully more children can benefit