Get curious, or risk being left behind

Debate about resurrecting the Lydney-Sharpness bridge is shining a light on the way we think about travel and health. 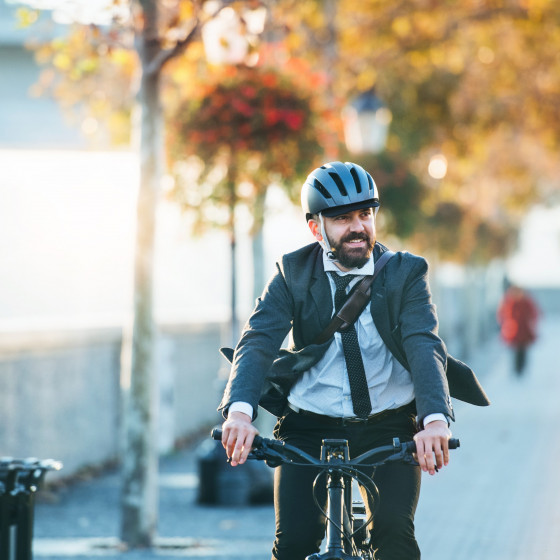 A man cycling to work in the city.

Debate about resurrecting the Lydney-Sharpness bridge is shining a light on the way we think about travel, pollution and health.

For nearly 100 years, the Lydney-Sharpness bridge carried coal and people across the Severn between the two towns and beyond. Children in one town went to school in the other. People lived and worked on opposite sides of the river. Couples fell in love and friends fell out across a distance of less than a mile. Until it was destroyed by a river barge accident in 1960, it connected families, communities, and economies. So why are proposals to resurrect the span as a foot, cycle and public transport bridge being branded as ‘bonkers’?

The benefits to local businesses, better access to local amenities, more jobs and the freedom to cross the river in a 15-minute stroll instead of an hour-long drive all seem very positive. Add the idea that it should be exclusively for foot, bike and public transport, and the public health benefits are clear – less pollution and more physical activity in our lives cuts the risks of problems like asthma and cardio-vascular disease.

Access to a whole new town opens up on our doorstep, there are more jobs, we breathe cleaner air and we live longer. Seems like a win-win, right?

I love Gloucestershire. I love the people, the landscape, and the varied communities that have grown up here. But…I have a sneaking suspicion that we are so wedded to the car that it has blinded us to any other possibilities. I also worry that, as other parts of the country engage in a healthy debate on the right balance between different travel options, we are being left behind. Ultimately, that will make us a less attractive place for businesses, young families and tourism.

This isn’t about fashionable ideas or political divides (we’ve all had enough of that recently to last us a lifetime). It’s about hard evidence.

Medical research tells us that air pollution, particularly the nitrogen oxide and particulates found in vehicle emissions, damages our health. We develop problems with breathing, heart function and circulation. Dependence on cars, instead of more active forms of travel, means we miss out on physical and mental health benefits of being more active. This is aggravated by our failure to shape our towns so that walking and cycling is attractive, or even easier than driving. Avoidable health problems affect children’s development and education, cut short our working lives, pose a greater risk to older people, and make us less happy.

There is a massive weight of scientific evidence showing that carbon dioxide emissions drive already accelerating global warming. In Gloucestershire, we are already preparing for more frequent flooding and heatwaves – not as a distant possibility but right now. I can’t find any good reason why we shouldn’t do all we can to minimise the impact that is coming.

I’m not advocating that the Lydney-Sharpness bridge be built tomorrow, only for all of us to be a bit more curious about the idea. Let’s get out of our car-focused thinking and start to wonder about what the health and environmental benefits might be for communities on both sides of the Severn.

Join the conversation on this article on LinkedIn here.

Tom is Director of Business Development at Active Gloucestershire.